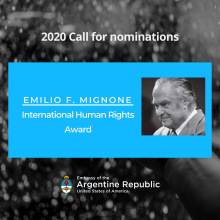 The government of Argentina established the award in 2007 in order to recognize the work of foreign institutions and / or people residing abroad in the promotion and protection of Human Rights.

It is inspired by the figure and work of Emilio F. Mignone, who was one of the main defenders of human rights in our country and a founding member of the Center for Legal and Social Studies (CELS).

The purpose of the Award is to contribute to the organization or person that is awarded to give visibility to the issues on which they work, strengthen the bonds with civil society organizations in Argentina and to value their commitment to the promotion and defense of human rights in their country of origin.

The example of the unwavering fight of human rights organizations in Argentina, made up of victims, relatives and human rights advocates who sought to eradicate impunity for the serious crimes committed in our recent past, consolidating the process of Memory, Truth and Justice, and strengthening the democratic institutions, will be a guide in choosing those who will be awarded.

Applications will be received until October 31, 2020.

To submit a candidacy, the institution or person must complete a form found on the website of Argentina's Ministry of Foreign Affairs, International Trade and Worship

The receipt of the proposal will be confirmed by email.

The proposals received will be examined by the Selection Committee made up of the National Secretariat for Human Rights, the Center for Legal and Social Studies (CELS), the Mignone family and the Human Rights Bureau of Argentina´s Ministry of Foreign Affairs, International Trade and Worship.

The Selection Committee will choose three institutions or candidates and will send the shortlist to the Minister of Foreign Affairs, International Trade and Worship, who will choose the winner.

The Award will be given at a ceremony presided over by the Minister of Foreign Affairs, International Trade and Worship, with the presence of authorities from the National Secretariat for Human Rights, CELS representatives, and the Mignone family. Government authorities, members of human rights organizations, the diplomatic corps accredited in Argentina and the general public will participate in the ceremony.

The Mignone 2020 Prize will consist of an invitation to the person or a representative of the awarded institution to visit Argentina for a week. This includes economic class flight tickets from their place of residence, accommodation, and per diem. During their visit to the city of Buenos Aires, the winner will have an agenda of meetings and activities with government institutions, human rights organizations, academic institutions, and the press, among others. The agenda will be decided with the winner according to the specific topic of their work. It should be noted that due to the situation caused by Covid-19, the Prize will be effective when sanitary conditions allow it in the framework of the pandemic.

The award ceremony will be held, if possible, on December 10, 2020 on the Human Rights Day, in commemoration of the approval of the Universal Declaration of Human Rights in 1948 by the United Nations General Assembly. Also, the winner will receive a symbolic statuette, whose design will be held in an art contest. The call for the design contest will be reported shortly.

For inquiries you can write to premiomignone@cancilleria.gov.ar