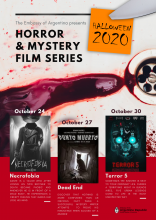 Since its inception, the national cinema scared several generations with legends and native monsters, as well as adaptations of literature or remakes of foreign films. But it wasn´t until the 2000’s that horror films came of age, multiplying the number of productions with the support, starting in 2008, of the National Institute of Cinema and Audiovisual Arts (INCAA).

The Buenos Aires Rojo Sangre Festival (BARS), which was born in 2000, gave it impetus and became one of its main show windows. This international festival has already screened 200 films and reaches 12,000 viewers each year. Likewise, the Blood Window festival, organized by INCAA in collaboration with the SITGES International Fantastic Film Festival, exhibits every year for three days the most outstanding international films of the genre and takes its itinerant exhibition to Latin America, having reached the cities of Mexico and Santiago de Chile.

For the first time to celebrate Halloween, the Embassy of Argentina joins these efforts by bringing viewers in Washington some examples of our country’s production of the genre. Each film will be available from the day of its premiere until November 2. We hope you enjoy them!

Dante is a tailor who after losing his twin brother to death became phobic which prevents him from being in contact with death. Whenever he is in front of a dead body, he experiences a creepy feeling that makes him lose his mind.

This film had its world premiere at Mar del Plata International Film Festival, the only “Class A” film festival of Latin America, and won 4 awards, including “Best Film”, “Best Script”, “Best Music” and “Best Actor”. Luis Penafiel is a writer who has just finished a novel that presents the perfect crime in a closed room. He has achieved the respect and admiration of all their fellow writers because of the surprising and dramatic resolution of his story. The same night, a writer will be killed, following the same pattern in its history. Peñafiel is accused of the crime, and to prove his innocence, he must find the real killer. In its effort to prove his not guilty, Peñafiel, you will discover that nothing is more confusing than an obvious fact…

The night that TERROR 5 takes place is the commemoration of the 10th anniversary of the tragedy of Camargo Street. That night Gabriela and Hernán decide to go to a motel for a "crazy" night. Paulo and Luciano try to convince Mariana and Marina to do a swinging. "Gene" gets a strange dvd. Juan meets Sonia in what seems to be an ordinary date. And it's the same night in which the families of the victims in the cemetery along with their deceased heard the verdict of the tragedy.