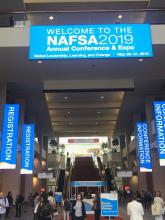 During the week of May 26-31, more than 20 public and private universities from different provinces of our country, the Ministry of Education and representative of the General and International Relations Secretariat of the City of Buenos Aires participated in the NAFSA 2019 Conference and Expo, the most important event of this "Association of International Educators", looking to position Argentina as an exceptional destination for foreign students. The theme for this year's edition was "Global Leadership, Learning and Change".

Founded 70 years ago, NAFSA is a nonprofit organization based in Washington DC, with a membership of approximately 10,000 international education professionals in more than 150 countries that are dedicated to promoting and managing student and academic exchange programs between institutions of higher education worldwide.

This year, the Embassy was officially considered a "friend of NAFSA", in recognition of its commitment and cooperaton, as result of the work carried out to identify opportunities to strengthen the presence and participation of Argentina in the Conference.

In this framework, the Embassy received the "Winners of the 100,000 Strong in the Americas (100K) Innovation Fund", which provides support to partnerships in of higher education, to the creation of institutional capacity, to exchange and training programs, and to regional cooperation in education. It should be noted that our country is among the top five beneficiaries of the 100K Innovation Fund grants, in partnership with universities in the United States.

Also, the Argentine Embassy was one of the few representations (less than ten in total) to host a networking reception for more than 200 people from all over the world, which allowed both the Argentine universities and the rest of the Delegation of our country to connect, share success stories and establish links for future alliances and collaboration with leaders of US and international universities, representatives of the State Department, United States Embassies, and other higher education leaders.

Taking advantage of the platform provided by this Conference, the National Director for International Cooperation of the Ministry of Education, Francisco Miguens Campos, and the Manager of "Study Buenos Aires", Cesar Sanchez Casares, presented their strategies to attract international students -"Study in Argentina" and "Study Buenos Aires" respectively- to universities´ representatives from around the world that are current partners and/or potentially interested in cooperating with Argentine universities.

In his visit to the Argentine Stand, Ambassador Oris de Roa highlighted the efforts of the Argentine Government, through the Ministry of Foreign Affairs and in line with other Ministries, provinces and universities, to position Argentina as a destination for students from around the world and to present an academic offer meeting the demands of the international market.